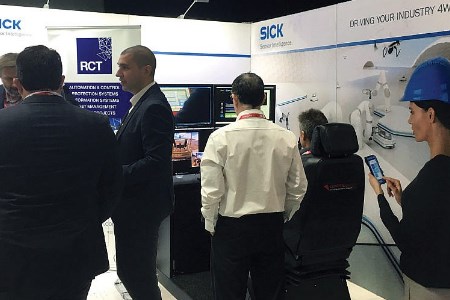 Brett White, RCT CEO, David Holman, Head of Product and Operations, and Rob Derries, Head of Custom Projects, interacted with between 150 – 200 people over the course of the event.

Holman said: “Visitors to our stand were extremely interested in the new Automation Centre and the other various RCT projects on display.”

“IMARC attracted a large number of senior executives including CEO’s, General Managers and other executives who were investigating autonomous strategies for their operation and displaying the new Automation Centre gained fantastic interest and was an ideal opportunity to show RCT’s latest technology.”

Holman added that roughly 60% of delegates who visited the stand were from Australian-based mining companies or contractors.

IMARC 2019 is scheduled to take place at the Melbourne Convention and Exhibition Centre from 29 – 31 October.

Read the article online at: https://www.globalminingreview.com/product-news/14112018/rct-automation-systems-on-show-at-imarc/

HighGold has released drilling results at its JT deposit in in Alaska, reporting the best intersection drilled to date.