Bryah Resources Ltd has announced the start of a diamond drilling program at the Windalah Copper-Gold Prospect, which lies within the company’s Bryah Basin Project, located in central Western Australia. 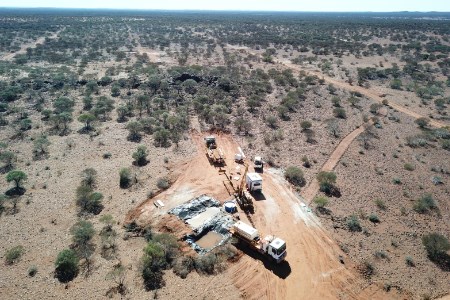 Three RC drill holes intersected a broad disseminated to semi-massive sulfide zone with highly elevated antimony and arsenic, together with weakly elevated copper and gold values. This sulfide-rich zone is considered to be the source of the surface VMS pathfinder element anomaly.

The sulfide-rich zone targeted by this diamond drilling lies within moderate to intensely sericite-chlorite-pyrite altered mafic volcanic/volcaniclastic rocks of the Narracoota Formation, just beneath the contact with the overlying sediments of the Ravelstone Formation.

“This is the first diamond drilling ever undertaken at Windalah, an area we believe holds significant potential for copper-gold mineralisation at depth.

“We have observed highly elevated key pathfinder minerals, including some copper, within a broad sulfide-rich zone in earlier drilling. This zone also lies in the same stratigraphy as the nearby known high-grade copper-gold deposit at Horseshoe Lights.

“Bryah Resources plans to drill over 1000 m of diamond core in this program testing this target zone and we look forward to seeing the results as they become available.”

Read the article online at: https://www.globalminingreview.com/mining/23082021/bryah-resources-commences-diamond-drilling-at-windalah/