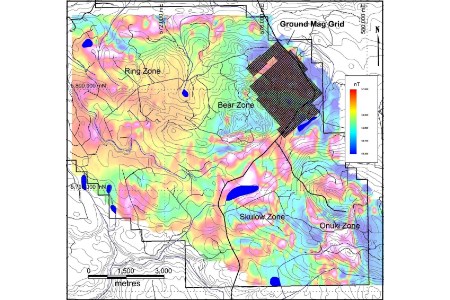 The survey is designed to delineate drill targets in serpentinite-magnetite hosted nickel mineralisation. The survey will encompass 624 ha. in the Bear North and South zones situated on the north-eastern extent of the property. The aforementioned zones extend 3 km long, forming the eastern rim of a large (9 km diameter) circular magnetic feature interpreted to be an ocean basin accreted seamount containing ultramafic complexes (Figure 1). Scott Geophysics Ltd of Vancouver, BC is completing the survey.

The Lynx area is geologically similar to Beaver with even larger prospective targets areas. Regional stream sediment (RGS) data collected by the Province of British Columbia illustrates the existence of a large 10 x 5 km nickel anomaly at Lynx. An airborne magnetics survey delineated an 8 km-wide ring-like magnetic anomaly and several strong magnetic anomalies – all greater than 2 km in length.

Figure 1: Ground-magnetic grid over Bear zone of Lynx property. An 8 km-wide ring-like magnetic anomaly and several strong magnetic anomalies greater than 2 km in length have been delineated at Lynx by an airborne magnetics survey.

Read the article online at: https://www.globalminingreview.com/mining/02022022/inomin-to-start-ground-survey-at-lynx-to-identify-nickel-drill-targets/