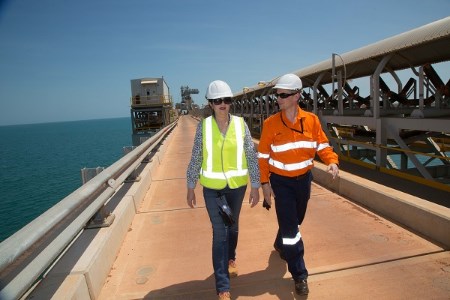 Out of a total cost of AUS$2.6 billion, Rio Tinto has spent AUS$2.1 billion with Australian companies, of which two-thirds has been with local Queensland business. This includes AUS$244 million invested with local Cape York companies.

Palaszczuk said: “It is a tremendous achievement that more than 770 Queensland businesses have been engaged directly and indirectly to supply goods and services at the Amrun project.

“Rio Tinto has set a benchmark in supporting our local and regional suppliers. This significant investment will build a strong foundation to ensure the sustainability of Western Cape communities for decades to come.”

More than 1200 people are now working on site including 900 Queenslanders representing 75% of the workforce - 178 are Aboriginal or Torres Strait Islander including 67 Local Aboriginal People.

The ship loader, the final major piece of infrastructure for the project, is now onsite being assembled following a seven-day voyage from Western Australia to Queensland.

Jacques said: “Since the Amrun project’s approval in 2015 we have placed a strong emphasis on providing opportunities for Queensland businesses to contribute to the project through our Local and Indigenous Participation Plan.

“This approach has provided a significant boost to the Queensland economy and to the people in the communities where we operate. We are proud of our contribution so far and look forward to completion of the project as it will represent a new chapter in Rio Tinto’s 60-year history on the Western Cape.”

Read the article online at: https://www.globalminingreview.com/finance-business/31082018/rio-tintos-amrun-project-spends-over-aus15-billion-with-queensland-companies/