China’s 14th 5-year plan is carving out a new pathway for the country, ensuring a greener future for its population. But, as focus shifts to electric vehicles, how can the auto sector seize the opportunity to expand its reach to international markets? 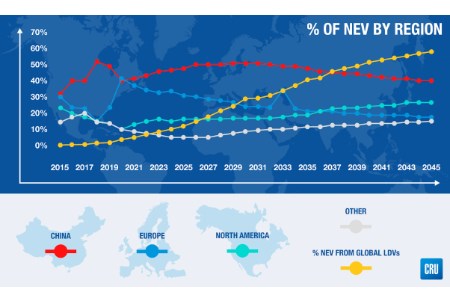 The 13th 5-year plan outlined an expected sales target of 5 million new energy vehicles (NEV) by 2020, and targets have since only increased.

To showcase how this unique opportunity could lead the Chinese automotive sector into European and Asian markets, analysts at CRU Group have created a table, outlining the potential growth expectancy.

China has driven its global sales thanks to subsidy schemes, but despite scaling them back, it still expects to see half of global NEV sales to be in the country over the next decade.

To achieve this, the Chinese government has mandated a minimum quota of NEV sales for automakers, whilst increasing the availability of high-quality models.

The table below outlines how China plans to surpass 20% of NEV sales, to over 50% in the next 25 years.

Despite this plan for success, European EV scales have skyrocketed. Five EV markets in Europe increased their subsidies, leading France, UK, Germany, Sweden, and the Netherlands to see an overall 144% y/y increase in 2020.

Chinese automakers might not have to worry too much though, as waiting lists for EVs have grown, resulting in the potential for European NEV manufacturing capacities to fall behind.

China must also remain aware of the lack of presence their car brands have in the West. It is not expected to be an easy transition, but precedent has already been set for the country.

The Toyota Corolla became the best-selling car of all time, despite Japan’s vehicles being an extremely rare sight outside of the country until the late 1960’s.

China is working towards developing their breakthrough brands, and they’ve already proven to be a viable business model. In fact, brands such as Xpeng and NIO being a cheap and available option in the West. Manufacturers believe that should one of these brands succeed in scaling up production of affordable NEVs, they could have a huge impact on the global NEV markets.

This could also further the acceleration of key automotive materials, such as steel, aluminium and copper. As Chinese EVs are more likely to use cheaper LFP battery chemistries than European ones.

This would lead to strong implications for long-term nickel and cobalt demand, once again reshaping the global markets, due to Chinese success.

Overall, should this plan succeed, China expects to see European sales drop to 18%, as well as American sales reaching 26% by 2045. This is a stark contrast to the expected 40% of Chinese NEV sales.

Read the article online at: https://www.globalminingreview.com/special-reports/11052021/the-ways-china-could-dominate-international-ev-markets/

The Federal Government of Nigeria, through the Ministry of Mines and Steel Development, seeks suitably qualified local and international investors with pre-requisite experience, technological expertise, and financial capacity, through a transparent and competitive bidding process, to carry-out bitumen development to a meaningful extraction-level under a public-private partnership arrangement.