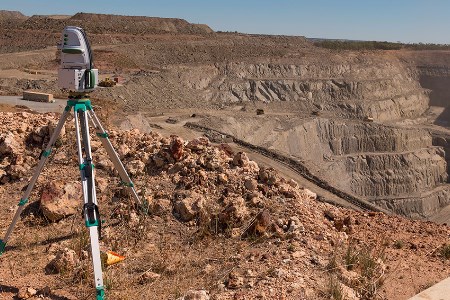 Five years on, the company trusted its instincts that mine surveyors would readily adopt high-end survey equipment combined with proven smart software, and in 2004 Maptek began building laser scanning hardware. Over the next decade, they continually refined their systems. Compared to the I-Site 8800 series, the latest I-Site XR3 and LR3 laser scanners are 30% smaller and 25% lighter, with 2.5 times faster data acquisition, and offer 25% improvement in range capability. A new high-dynamic-range panoramic camera produces high-resolution digital images for geotechnical analysis and geological mapping.

The I-Site XR3 has a scanning range of up to 2400 m, giving wider coverage with fewer scans and allowing survey of otherwise unattainable areas. The I-Site LR3 scanning range of 1200 m makes it the system of choice for small to medium pits and quarries, as well as indoor stockpile volumetrics.

“Maptek’s business model of developing, selling and supporting our own products is by its very nature customer-oriented,’ continued Richards. ‘Surveyors are asking for ever more compact systems. Site conditions demand reliability and ease of field use alongside increasing flexibility for teams to share operational data.”

“Our first laser scanner, the I-Site 4400 has stood the test of time. We have in fact just announced ‘end of life’ to the disappointment of at least one customer still using that model productively for mine survey.”

The I-Site XR3 and I-Site LR3 are compatible with laser scanning applications, such as Maptek Sentry for surface monitoring and PerfectDig for design conformance. Modular design allows configuration of the system to match site requirements.

Maptek has also built and launched Sentry as a fully transportable monitoring system. Deployed in a custom trailer, the system offers a power and communications module, cellular and wifi networking, a dedicated, stable bollard for an I-Site laser scanner and proven Sentry software.

Read the article online at: https://www.globalminingreview.com/product-news/08032017/maptek-delivers-smaller-lighter-faster-mining-tough-laser-scanners/

Foran Mining Corp. has announced additional results from drilling at the recently discovered Tesla Zone on its McIlvenna Bay Project in Saskatchewan.

Digitalization of your mining operations for the future

Join us on 27th September for a live webinar with Honeywell