Epiroc, one of the leaders in automation development, is constantly pushing the boundaries in the rock excavation industry. Proof of this is that the world’s first fully autonomous SmartROC D65 surface drill rig, is now in production. 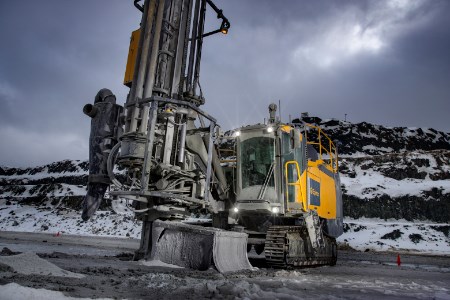 In the midst of the fourth industrial revolution, Epiroc presents an important milestone for surface drilling in opencast mining and quarrying. With a push of a button, it is now possible to complete entire drill patterns autonomously.

Not only will this remove the operator from potentially hazardous benches in a mine or a quarry, it will let the operator carry out other tasks while the rig is drilling. Other benefits are increased productivity and better hole quality. This means more holes drilled per shift, in part because automating the drilling process results in continuous operations without breaks and with less wear on drilling tools. In addition to this, positioning is faster and more accurate.

The achievement had not been possible if it was not for the strong partnership between Epiroc and Newmont Goldcorp (fmr. Goldcorp) and their dedicated staff in the Hollinger opencast mine in Timmins (Canada). Epiroc’s 6th Sense way of working was used to implement and develop the fully autonomous SmartROC D65. In the project, Epiroc and Newmont Goldcorp collaborated on a tailored solution that gathers ongoing insights to optimise process and people performance and unlock the potential of machine automation using interoperability.

“The Hollinger project is a perfect example of collaboration between a mining company and Epiroc, which demonstrates what our industry is capable of achieving. The future is very exciting,” says Brian Doffing, President of the Surface and Exploration Drilling division at Epiroc.

“To make this work we are using the smart functions on the drill rig that are already there. Since we developed these functions over the years we have a good understanding of how to incorporate them in the autonomous mode,” says Mayya Popova, Product Manager Automation, Surface and Exploration Drilling division at Epiroc.

Read the article online at: https://www.globalminingreview.com/mining/28062019/epiroc-reaches-important-milestone-in-surface-drilling-automation/