The new R 9200 E with a rated output of 850 kW (1675 hp) is the biggest excavator on Eurovia’s 350 sites on 23 May. The electric 210 t excavator balances performance with environmental consciousness: no exposure of people and the environment to diesel emissions and noise, longer engine lifecycle and up to 25% less maintenance costs compared to a diesel excavator. 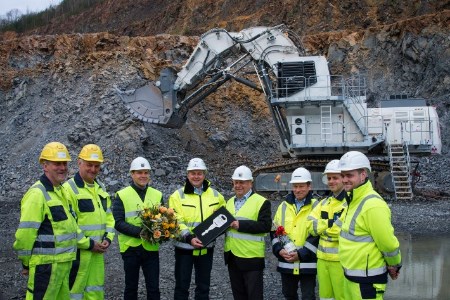 The R 9200 E has been designed to fully answer requirements of the mining industry. In addition to the massive integration of components designed in-house by Liebherr, the R 9200 E design and new technologies are inspired from larger Liebherr mining shovels of the latest generation like the R 9400 and R 9800.

Moreover, the machine has been developed to promote easy and fast maintenance: its service flap is accessible from the ground level and offers direct access to grease, hydraulic oil and windshield cleaner refilling points (and fuel for diesel engines). Fitted with Wiggins quick couplings for all fluids as a standard feature, the required time to refill each fluid is consistently reduced.

In addition, to reduce maintenance and machine downtime, the electric motor is equipped with an air-to-air heat exchanger. This integrated and easy system is less maintenance intensive than traditional cooling systems for diesel engines. The air-to-air heat exchanger doesn’t use polluted air from the outside which keeps the electric motor protected from dust at all times.

The R 9200 is the only 200 t class mining excavator using a closed loop swing circuit. The kinematic energy can be saved when the swing motion is used during deceleration, to drive the main and auxiliary pumps allowing faster other motions. Further, with an electric drive truck, the hydraulic power can briefly be higher than the nominal power during the load cycle, which results in better reactivity and shorter cycle times to gain higher productivity.

Together with the Liebherr-patented Litronic Plus system for intelligent power management, the R 9200 E achieves super fast cycle times, the fastest measured at less than 20 sec. Fitted with a 12.5 m³ (16.4 yd³) HDV bucket and patented Liebherr GET to load material with a loose density of 1.65 t/m³ (2.8 lb/yard³), the R 9200 E efficiently loads 65 t dump trucks in three passes.

Accessibility, comfort and safety set the standards for the panoramic Liebherr cabin. The hydraulic control system of the R 9200 is optimised in order to improve combined machine motions. The ergonomically mounted joysticks on the suspended seat armrests allow the operator to precisely position the machine.

In addition, the fully air-conditioned cab is equipped with a pressurisation system. This system prevents dust from entering the cabin so that the driver can breathe clean air.

Read the article online at: https://www.globalminingreview.com/mining/25052018/eurovia-mine-receives-excavators-from-liebherr/