A global innovator in dust suppression technology has established a memorial scholarship fund in honour of one of the company’s founding members to support mining engineering education at Missouri University of Science and Technology in Rolla, Missouri. Sponsored by BossTek, the Barry Eaton Brown Memorial Scholarship is available to mining engineering students who demonstrate a need for financial assistance. 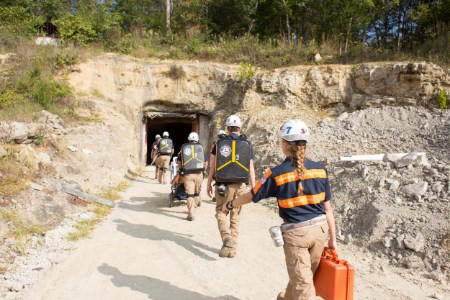 “The scholarship is an opportunity for us to help support students in mining, which has been part of the foundation of our company since its inception,” observed BossTek CEO Edwin Peterson, who is also a third-generation owner of Martin Engineering.

“It’s also a way for us to honour the memory and career of our friend and mentor, Barry Brown, a significant influence on dozens of people who went on to make significant contributions to the mining industry.”

Missouri S&T was founded as the Missouri School of Mines and Metallurgy (MSM) in 1870 – the first technological institution west of the Mississippi, and one of the first in the nation. Early academic programs focused on the state's mining industry and its immediate technological needs, but, by the end of the 1920s, courses of study included mining, civil, mechanical, electrical and chemical engineering, as well as chemistry, metallurgy, mathematics, physics and geology.

In 2008, the school became Missouri University of Science and Technology (Missouri S&T) to reflect its growing reputation as one of the nation's leading technological research universities. The university has approximately 6800 undergraduate and 1800 graduate students, and offers 99° programmes in 40 areas of study.

“Scholarship investments from companies like BossTek provide our students with life-changing financial assistance,” said Joan Nesbitt, vice chancellor for University Advancement.” That means they can focus on learning, graduate on time and realise the return on investment an S&T degree delivers. We are grateful for BossTek’s support of our mission.”

Missouri S&Ts extensive mining engineering facilities include the Experimental Mine and Rock Mechanics and Explosives Research Center. The Experimental Mine supports teaching and research initiatives in mine ventilation, rock mechanics, drilling and blasting, explosives engineering, mineral processing and surface and underground mining methods.

The mine is also used by the U.S. Army and the Department of Homeland Security for tests and research. It is one of only two sites in the country where professional mine rescue competitions are held to train first responders in mine disasters.

The Peterson family’s relationship with mining dates back to the 1960s, when Edwin H. Peterson led Martin Engineering’s entry into the mining industry, where the company would go on to become one of the world’s premier innovators in bulk material handling equipment and safety. He has been a driving force for more than 60 years and remains so today as Chairman. The firm includes a number of fourth-generation family members, such as Edwin’s son Rand, who works in sales and service, reporting to Barry Brown’s son, Doug.

The Brown family has even deeper roots in the mining industry. “My great-grandfather got his start in mining when he was just a teenager,” recalled Doug. “He was eventually promoted to Mine Manager when he was just in his 30s.”

Barry Brown spent more than 20 years at Martin Engineering, retiring as Vice President of Sales & Marketing. In fact, a young Edwin Peterson reported to Barry in the early years, before the two partnered in a new venture they called Dust Control Technology, which has evolved into BossTek. The company’s sole focus in its first decade was large-scale dust suppression for mining, demolition and other industries. The firm has since expanded its scope to include leading-edge odor control technologies.

Both Martin Engineering and BossTek remain family-owned and operated, and it’s not uncommon for second- or third-generation employees to build their careers alongside the Petersons. Doug smiled when he recalled being just 8 - 10 years old and visiting Edwin’s family with his father.

“Edwin’s Mom used to bake us cakes for our birthdays,” he recalled. “It was a family affair back then, and it still is, even after more than 70 years in business.”

Read the article online at: https://www.globalminingreview.com/mining/25022019/bosstek-sponsors-mining-scholarship/

Alkemy Capital Investments plc has announced that its wholly owned subsidiary, Tees Valley Lithium Ltd, has entered into a memorandum of understanding with Weardale Lithium Ltd to provide a secure and sustainable domestic supply of lithium in Weardale, County Durham.