Magna Mining Inc. has announced that drilling has commenced at the Crean Hill Mine, part of the Denison Project in Ontario, Canada. 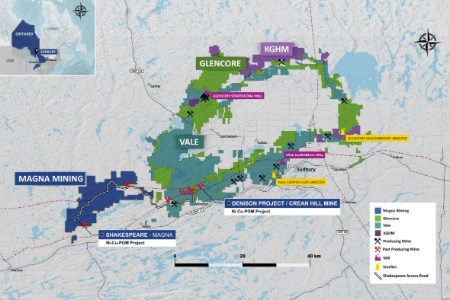 To date, three holes have been completed and each has intersected mineralisation as expected, including massive sulfide mineralisation in drillhole MCR-22-003. The company expects to complete approximately 2000 m of drilling prior to the Christmas break, and resume diamond drilling in January.

The company has awarded the contract to complete a preliminary economic assessment (PEA) to Stantec Consulting Ltd. The PEA will be used to demonstrate the potential economics of the Denison Project, identify, and quantify synergies with the company’s Shakespeare Project, and make recommendations for additional work which will support a future pre-feasibility study. The completion of the PEA is anticipated early in 2Q23.

“We are pleased to have secured a local drilling company for the Crean Hill diamond drilling so quickly after the closing of the acquisition of Lonmin Canada Inc. Our initial drilling has intersected massive sulfide mineralisation, as expected, and demonstrates the quality of the mineral resources remaining at Crean Hill. The initial 1500 – 2000 m in this drilling program at Crean Hill is designed to provide technical information to support the PEA, as well as provide material for metallurgical or other required testing as our technical studies progress.”

The initial drilling program at Crean Hill is targeted within the current mineral resources, within areas that will be considered for advanced exploration and potential bulk sampling. To date, three drillholes have been completed, and have intersected mineralisation as expected, confirming the accuracy of the historical stope models, geological models, and overall quality of mineral resources remaining at Crean Hill. The first two holes targeted near surface Cu-Ni Sudbury Igneous Complex (SIC) contact style mineralisation within the current open pit resource. The third drillhole, MCR-22-003, targeted the 101 Zone, which is associated with a breccia system trending southwest from the main SIC contact mineralisation, into the footwall rocks. Sudbury footwall orebodies are commonly hosted within breccia systems, and often are elevated in copper and platinum group element (PGE) mineralisation, relative to typical SIC contact mineralisation. Drillhole MCR-22-003 was targeting below and adjacent to historically mined stopes and confirms the mineralisation continues down-dip and along strike to the southwest. The drillhole intersected approximately 70 m of footwall breccia, with local disseminated to stringer mineralisation throughout, and includes massive sulfide mineralisation from 168.1 – 169.8 m and 173.1 – 178.8 m downhole, (1.7 m and 5.7 m, respectively). Additional drilling will be designed to further extend the 101 Zone mineralisation.

In 2023, Magna is budgeting 12 000 to 15 000 m of drilling that will be focused on expanding on the existing mineral resources and testing new exploration targets in the footwall of the SIC, as well contact nickel and copper targets to the east of the current resource.

Read the article online at: https://www.globalminingreview.com/mining/18112022/magna-mining-commences-drilling-activity-at-crean-hill/