Wirtgen surface miners play a key role in increasing production and reducing costs in material extraction for a large cement plant in Ukraine. 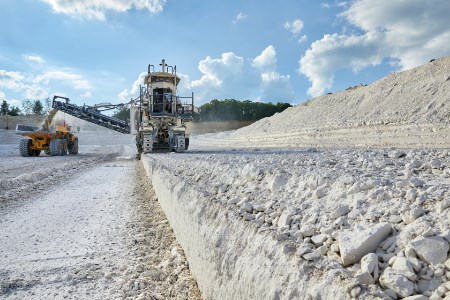 PJSC Ivano-Frankivskcement (IFCEM) produces clinker and 300 other cement and gypsum products. The raw material for the cement plant comes from a deposit located 15 km to the north. The Carpathian mining area is rich in sedimentary rocks such as limestone, marl and gypsum.

Production increase thanks to Wirtgen technologies

For years, the material was extracted by drilling and blasting and then wet-processed into clinker in the cement plant. In a move to increase productivity and reduce costs, IFCEM became the first cement plant in the Ukraine to initiate the transition from the wet to the dry process, a measure which was accompanied by an optimisation of the mining method for material supply.

The dry process is now considered the preferred method for clinker production as it reduces fuel consumption per ton of material. This in turn has a positive effect on production, costs and the environment. For an optimal drying process, the material from the quarry should only have a low moisture content so that it can be crushed in a dry crusher, ground to powder in the raw mill and burnt in the rotary kiln without further pre-treatment.

In order to ensure that the material extracted from the quarry is as dry as possible, a radical change in the mining method was necessary. Meanwhile, the previous use of explosives for limestone mining was having a detrimental effect on neighboring residential areas due to the noise generated and the ground vibrations. IFCEM found the solution in Wirtgen surface miner technology: In 2012, the company purchased a 2200 SM, in 2015 a second, identical model and in 2017 a 2500 SM.

By gradually phasing out the drilling and blasting operations, the surface miners progressively reduced the time and cost involved in pre-crushing and post-crushing the material and also made it possible to redesign the deposit. By ensuring a defined slope of the surface with the aid of the Level Pro automatic leveling system, the surface miners created the conditions for efficient dewatering.

Compared to drilling and blasting, this allows much drier raw material to be mined and the material can enter the plant's drying process without any further treatment. Thanks to the redesign of the mining area with the surface miner, the exploitation of the deposits has also been increased, because now even previously unused areas can be worked and additional material extracted.

The increased mining volume thus also had a major influence on the selection of the third machine model. After the impressive results of the smallest Wirtgen surface miner 2200 SM with a 2.2 m cutting drum and a cutting depth of up to 300 mm, the technical management of Ivano-Frankivskcement now opted for the even more powerful model, the 2500 SM.

Together, the three Wirtgen surface miners generate a daily output of 7000 t, which also leads to optimum utilization of the cement plant. The 2500 SM has made an important contribution to this, as well as to increasing production in the limestone quarries, where the material has a uniaxial compressive strength of between 20 - 70 MPa depending on its depth. The 2500 SM, which has already clocked more than 4500 hours, is equipped with a 2.5 m wide cutting drum fitted with cutting tools on an HT 15 quick-change tool-holder system. HT 15 reduces the time required to replace the tool-holder from 90 min. to 15 min. compared to conventional welded tool-holder systems.

The 2500 SM, which can remove material up to 650 mm deep, extracts the material in Ivano-Frankivsk up to a depth of 40 - 45 cm. Depending on the rock hardness, the surface miner achieves a feed rate of 5 m/min. and a grain size of 0 - 100 mm. Depending on the hardness of the rock, the entire tooling is replaced at intervals that vary between 200 - 500 hours based on the machine's field of application.

Since its market launch, the 2500 SM has proven its performance and flexibility worldwide, as it can be used for the selective mining of raw materials with uniaxial compressive strength up to 80 MPa and in special cases even higher. The surface miner cuts, crushes and loads the rock in a single operation. Depending on the application, the material can either be loaded directly into trucks via the 11.3 m long, slewing discharge conveyor of the miner, deposited laterally or as a windrow between the machine's crawler tracks. The 2500 SM is powered by a 783 kW (1065 hp) engine and features precise mining of the useful minerals thanks to the Level Pro leveling system integrated into the machine's control system.

The operator sits in a spacious, sound- and dustproof, air-conditioned cabin. A video system with several cameras gives the operator a complete overview during the extraction process, ensuring maximum safety. Machine operator Svyatoslav Podolyak, who together with Voladymyr Sauchut has been driving the 2500 SM since last year, sums up the advantages: "This surface miner has an excellent production rate, which is even higher than that of the 2200 SM. And that was already very good. Thanks to the clearly arranged instruments, I have all important information at a glance. The soundproofed and air-conditioned cabin also gives me an optimal view of the cutting edge and allows me to concentrate on my work in the cold winters and hot summers typical of this region.”

Surface miners get on track for an efficient production cycle

According to Yaroslav Nesterovych Voznyak, Technical Manager of the deposit, the surface miners, especially the 2500 SM, have had a positive influence on the production cycle in the quarry and thus also in the cement plant: "The purchase of the Wirtgen surface miners made the transition from drilling and blasting to a safe mining process easy to implement. In addition to the environmental and production benefits, the surface miners have proven to be the best solution, especially in terms of cost efficiency and economical operation. The grain size of the material produced is ideal for the cement plant. This is why our fleet of surface miners will grow. We are already preparing a further mining area with a volume of around 180 million t of material, which we want to mine with our Wirtgen surface miners."

Read the article online at: https://www.globalminingreview.com/mining/17102018/wirtgen-surface-miners-offer-limestone-mining-without-drilling-and-blasting/

Maple Gold Mines has announced an appointment its technical committee and provided an update on the ongoing deep drilling programmes at the Douay and Joutel gold projects.