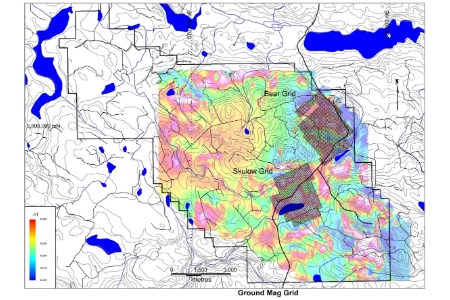 The Lynx area is geologically similar to Beaver with even larger prospective targets areas. RGS (regional stream sediment) data collected by the Province of British Columbia illustrates the existence of a large 10 x 5 km nickel anomaly at Lynx. An airborne magnetics survey delineated an 8 km-wide ring-like magnetic anomaly and several strong magnetic anomalies – all greater than 2 km in length.

Figure 1: Location of ground magnetic survey grids over Bear and Skulow zones of Lynx property. A distinct 8 km-wide ring-like magnetic anomaly and several strong magnetic anomalies greater than 2 km in length have been delineated at Lynx by an airborne magnetics survey.

Read the article online at: https://www.globalminingreview.com/mining/16022022/inomin-starts-ground-survey-at-lynx-nickel-property/