Alamos Gold Inc. has announced the groundbreaking for its Island Gold Mine Phase III Expansion project. 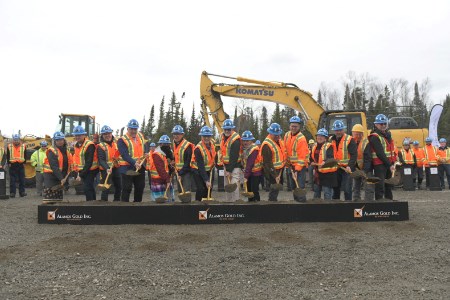 Already one of the most profitable mines in Canada, the expansion will increase production, lower costs, and be an economic engine for the Algoma region. The expansion will also best position the operation to benefit from additional exploration success.

• The Island Gold Mine is a significant employer in the region, sustaining over 600 jobs annually which will continue over the life of mine. During the construction phase of the expansion, employment is expected to double to 1200 jobs.

• The Phase III Expansion study published in July 2020 outlined a 16 year mine life, during which Island Gold is expected to expand from 1200 tpd to 2000 tpd, following the completion of the shaft in 2025. This is expected to drive production approximately 70% higher to average 236 000 oz of gold per year at significantly lower costs.

• Since the completion of the Phase III Expansion study, Mineral Reserves and Resources have increased 37% to total 5.1 million oz of gold as of the end of 2021. This growth will be incorporated into an updated mine plan which is expected to be released mid-2022. The optimised mine plan is also expected to incorporate higher-grade additions in proximity to the planned shaft bottom earlier in the mine life, further increasing the value of the operation.

• The addition of a shaft connected to a low-carbon intensity grid power in Ontario will support higher mining rates with a smaller mobile fleet of haul trucks resulting in significantly lower diesel consumption. This is expected to drive a 35% reduction in greenhouse gas emissions over the Phase III mine life.

“When we first acquired the Island Gold Mine we were aware of its potential. It had 1.8 million oz of Mineral Reserves and Resources, and through exploration investment we have increased this high-grade deposit to 5.1 million oz of Mineral Reserves and Resources. By further investing in the Phase III expansion, we will more than double the mine life. This mine will be an economic engine for this region for years to come, and positively impact the closest town of Dubreuilville and surrounding communities.”

“The Island Gold expansion will help to strengthen the Algoma economy and is the latest in a series of recent success stories in Ontario’s mining sector – successes that our government is proud to support. The project will bring good-paying jobs and prosperity throughout the region, including northern and Indigenous communities.”

“Our government has reduced electricity prices for large industrial customers, such as Alamos Gold, by 15% through our Comprehensive Electricity Plan. We are pleased to support expansions like today’s at Alamos Gold that will support good-paying jobs for communities in the north.”

Read the article online at: https://www.globalminingreview.com/mining/12042022/alamos-gold-announces-groundbreaking-for-island-gold-mine-expansion/

An electric hydraulic shovel will be commissioned at OceanaGold’s Macraes Operation in early 2023.