To say that Sierra Leone is rich in resources would be an understatement. Rutile, bauxite, gold and iron ore all number among the country’s abundant minerals. However, it is diamonds that the country is most famous for. 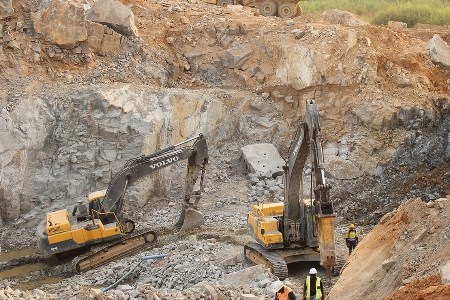 Since diamonds first became a girl’s best friend in the early 1930s, it is estimated that Sierra Leone has produced over 500 million carats (100 t) of the precious mineral. The diamond fields in the east of the country are equally gigantic, estimated to extend over 3000 square miles (7770 km2).

Prior to the civil war in 1991, mining was easily the most important economic driver for the West African country, accounting for around 80% of export earnings and 20% of GDP. However, during the conflict, the trade in Sierra Leone’s diamonds became controversial. When the war ended in 2002, the Government needed to reassure its overseas customers that all elements of its diamond trade were ethically acceptable.

The Peace Diamond Alliance (PDA) was created to develop competitive buying schemes; control environmental degradation; improve co-operation between the Government, business and civil society; and train miners in responsible mining practices. This was assisted by the Kimberley Process Certification Scheme (KPCS), an international certification scheme for rough diamonds that all but eradicated the illicit diamond trade.

Most large scale diamond mining operations extract the precious stones from kimberlite, an igneous rock that is similar to granite but darker in color. Kimberlite formed over 150 million years ago from volcanic eruptions from the earth’s mantle; the intense heat and pressure created the perfect environment for the formation of diamonds.

Meya Mining, based just outside Koidu, is committed to responsible and ethical diamond mining. It mobilised in October 2016 and holds a four year exploration license for a 130 km2 kimberlite reserve that spans from the Kamara Gbense to the Tankoro chiefdoms in the diamond-rich Kono District. Within Meya’s licensed area, 16 kimberlite dykes have been identified. Each dyke is approximately 12 km long, 1.5 m wide, and runs deep underground.

Meya employs over 200 people at the mine, including around 40 machine operators. 90% of the employees have been recruited locally; the other 10% are experienced mining specialists who help to train the main bulk of the workforce.

“We’re keen to prove that diamond mining can be good for the local communities,” says Dino Coutinho, Chief Operating Officer (COO) at Meya Mining. “We take corporate social responsibility seriously, and we’ve put many ecological and economic plans into motion to demonstrate this. One example is that we buy all our food, supplies and small parts from the local community.”

To mine and help process the kimberlite, Meya is using a fleet of Volvo excavators, articulated haulers and wheel loaders, which were purchased when operations began in 2016.

“As far back as I can remember, we’ve always used Volvo machines at our mines,” says Coutinho. “The fuel efficiency, uptime and performance are unmatched. Our operators are particularly fond of the maneuverability of the machines, as it means they can navigate through the tight spaces of the mine with ease.”

The machines were provided by Volvo dealership A. Yazbeck And Sons, based in Sierra Leone’s capital, Freetown. Joseph Yazbeck, the owner of the dealership along with his brother Assad, has maintained a close relationship with Meya Mining CEO Jan Joubert since 1997, helping him with mining ventures in the region.

“We’ve always had good support from Yazbeck and Volvo, who, in my opinion, is the best earthmoving supplier in Sierra Leone,” says Joubert. “They supported us with a credit line, brought us the new earthmoving fleet and enabled us to achieve our timeline.”

Two EC380DL crawler excavators are responsible for removing the earth and granite overburden that surrounds the kimberlite; a third uses an HB38 hammer attachment to displace the kimberlite and break it up into manageable (sub-350 mm) pieces. From here, five A40F articulated haulers ferry away the overburden and transport the kimberlite to the processing plant 2 km away.

Volvo’s articulated hauler design boasts 100% lockable, no slip, no wear differential locks in drive combinations. The automatic traction control (ATC) activates the differential locks when needed, and selects the correct combination based on the ground conditions – ensuring optimal traction and mobility, with reduced fuel consumption and tire wear. By locking all differentials, all wheels rotate at the same speed for maximum traction over the very tough terrain.

Once the kimberline reaches the processing plant, three large industrial crushing units break the kimberlite fragments down in order to free the diamonds. Two Volvo L120Gz wheel loaders handle the kimberlite between the various crushing phases. Any large diamonds are registered by special imaging technology that identifies carbon and are removed.

When the kimberlite pieces are no bigger than 12 mm, they are filtered into a high security building, protected by biometric scanners, cameras and guard dogs. Here, a small team of eagle eyed ‘diamond spotters’ examine the crushed ore on a conveyor belt. Each expert finder works for just two hours at a time, ensuring alertness so that no diamond is missed. Any diamond found is removed, graded and recorded. Nothing is wasted though; all excavated stone is repurposed for road construction and maintenance locally.

In November 2017, Meya Mining made international headlines when it announced that it had discovered a huge 476 carat (95.2 g) diamond at the mine. In the top 30 largest diamonds ever discovered, it is also the fifth largest found in Sierra Leone.

“The geo-economic potential here is very encouraging,” says Jan Joubert. “Once our full mining license is approved, we can begin full scale operations and help provide long-term economic stability to the region.”

Read the article online at: https://www.globalminingreview.com/mining/08032018/meya-mining-diamond-mining-can-be-good-for-local-communities/

LKAB will, after approval by the Swedish Competition Authority, acquire 75% of the shares in Bergteamet AB.