Vale has started operating six autonomous haul trucks at the Carajás iron ore complex, in the state of Pará, Brazil, and, by the end of the year, 10 vehicles will be operating at the site. 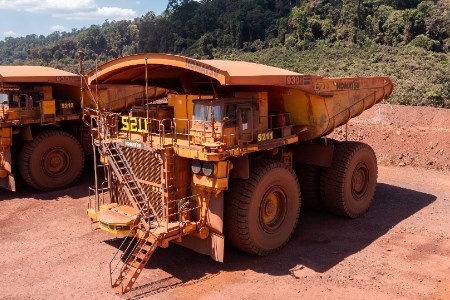 This initiative is part of a set of actions aimed at increasing employee safety, making the operation more environmentally sustainable and obtaining gains in competitiveness. The implementation is being accompanied by a human resources plan to train employees to work with new digital technologies.

Capable of moving 320 t at a time, the autonomous trucks have been undergoing testing in an isolated area in Carajás since 2019. They started the final testing phase at the N4E mine in late August, and now, as of 1 September, they officially went live. In the entire Carajás Complex, four autonomous drills are already in operation and by the end of the year this number will increase to seven drills.

Autonomous operations began to be implemented by Vale at the Brucutu mine, in the state of Minas Gerais, Brazil, in 2016, and now they cover all 13 haul trucks at that unit. Since the implementation in Brucutu, no accident caused by trucks has been recorded.

The autonomous trucks are controlled by computer systems, GPS, radar and artificial intelligence, covering the route between the mining front and the unloading area. Upon detecting risks, the equipment stops its operations until the path is cleared again. The safety system’s sensors are capable of detecting both larger objects such as large rocks and other trucks, as well as human beings in the vicinity of the road. Therefore, risky situations, such as tipping and collision, were eliminated.

“The introduction of autonomous trucks in Carajás is another step by Vale towards its ambition to become a reference in safety in mining and towards the goal of reducing carbon emissions by 33% until 2030.

“Technology reduces the exposure of employees to the risks inherent to the activity and also brings environmental benefits, reinforcing our new pact with society.”

Read the article online at: https://www.globalminingreview.com/mining/06092021/vale-deploys-autonomous-trucks-at-carajas-iron-ore-complex/