At a signing ceremony on 30 of September 2021, Akobo Minerals received its large scale mining license from His Excellency Eng. Takele Uma – Minister for Mines and Petroleum of Ethiopia. The award allows the company to begin mine development activities, leading to eventual gold production. 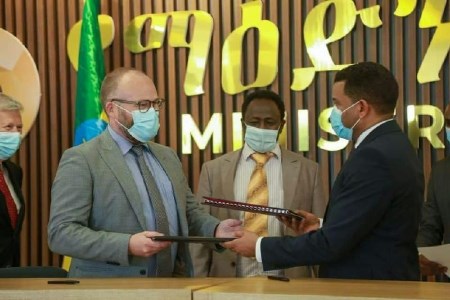 The ceremony at the ministry offices involved the Minister himself, Ambassadors from Norway, India and Australia, as well as industry leaders – marking a new era in the mining industry in Ethiopia. A total of seven mining licences were awarded. Full details of rights and obligations will be released once the mining agreement has been enacted between Akobo Minerals and the Ministry of Mines and Petroleum.

The ceremony was attended by key members of the Akobo Minerals team including company founders Jørgen Evjen (CEO) and Hans Olav Torsen (Chairman). Both Evjen and Torsen were fundamental in the inception of the company and after 10 years they have seen the company progress to mining development stage.

With a first mover advantage and favourable small scale mining economics shown in a scoping study, the company is well placed to begin the first gold mine in Southwestern Ethiopia. The new mining licence is surrounded by a highly prospective exploration licence also held by Akobo Minerals where the company is aiming to discover between 1.5 to 2 million oz of mineral resources.

Read the article online at: https://www.globalminingreview.com/mining/04102021/akobo-minerals-receives-large-scale-gold-mining-license/