Chances are, if you mention the phrase ‘gold rush’ to anyone associated with the mining industry, they’ll know you’re talking about the most popular show on the Discovery channel, cable TV’s #1 unscripted series for three years running. With new episodes attracting as many as 5.5 million viewers, the series has propelled the network to the #1 non-sports broadcasting spot on all of TV on Friday nights. Currently in its eighth season, Gold Rush follows the exploits of three competing mining teams led by Todd Hoffman, Parker Schnabel and Tony Beets as they seek to extract the most placer gold from their operations.

Sign in »    Become a member »
Get started absolutely FREE in 2 minutes, plus receive a free printed magazine. 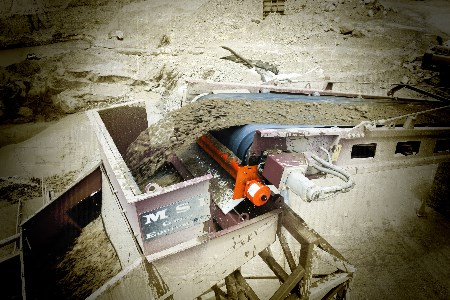 The Hoffman crew competes under the banner of the 316 Mining Company, with a team that includes Todd, his son Hunter and father Jack, as well as career miners Trey Poulson, Freddy Dodge, Andy Spinks and Jim Thurber. While their operations may be small by commercial mining standards, the competition is fierce, with season eight highlighted by a high stakes wager between the Hoffman and Schnabel crews: 100 oz. of gold to the team that mines the most of the highly prized mineral.

With gold currently valued at more than US$1200/oz., all three teams try to squeeze every last ounce from their operations, and they rely heavily on their conveyors to efficiently transport up to 300 tph of raw material for 12 hpd at 400 - 450 ft/min. (2 - 2.3 m/sec.). Processing begins when dump trucks empty their loads into a hopper. Rocks larger than 6 in. are scalped off, and the remaining load gets screened to separate the fines from the bulk. Fines are then run through a sluice box to wash out the gold particles.

“In a highly competitive situation like this, we have to collect every fraction of an ounce from the source material,” commented Poulson. “Our goal this season is 5000 oz., and we can’t afford to leave anything behind. So even a small amount of carryback or spillage from the conveyors is a serious issue for us. In these operations, we don’t have extra manpower, so any downtime for maintenance or repairs can be a disaster for us. We can’t afford to stop processing and shovel out spillage or make repairs during the 12 hour window that we’re permitted to operate each day.”

Poulson said that his goal is to extract an ounce of gold for every 100 yards of material processed, which is about four truckloads dumping into the hopper. When the team first started the operation, they were using the existing belt scrapers on the conveyors to clean any fines that remained on the belts at the discharge points. “The original belt cleaners weren’t as effective as we needed them to be,” he continued. “They were leaving some carryback on the belt, and we even had a couple of them came over and jam up the conveyors. On one, it actually ripped the belt.”

That’s when a chance meeting at a trade show gave Poulson the opportunity to meet representatives from Martin Engineering, one of the innovators and premier suppliers of components to make bulk material handling cleaner, safer and more productive. He stopped by the company’s exhibit at the event and started a conversation about some of the problems they were experiencing. The reps were confident that Martin components could resolve the issues and help the Hoffman team in its quest to out-produce the competition, and Poulson gladly accepted the company’s offer to supply 316 Mining with high efficiency belt cleaners.

“Belt cleaning was one of our biggest obstacles at the time,” he recalled. “We were wasting both material and labour, and we couldn’t afford to give that advantage to the competition.”

Martin Engineering technicians traveled to the Colorado site and reviewed the entire conveyor network, recommending specific cleaner designs for each application. On one they recommended the company’s patented CleanScrape® design, which is engineered to provide as much as four times the lifespan of conventional cleaners in difficult applications. “When I first met with the Martin guys, I had trouble envisioning how it would work. It’s unlike anything I’ve seen in my 20 years of mining. But it’s been in service for six months without us having to touch it. And the cleaning performance is great.”

For the wet conveyor, the Martin technicians selected a heavy-duty primary belt cleaner that features unique technology to maintain the most efficient cleaning angle throughout its service life. Equally important given the time constraints of the competition, the blade features a no-tool replacement process that can be performed safely by one person in less than five minutes. For the secondary cleaner, a rugged design with individually cushioned tungsten carbide blades was installed to withstand the punishing conditions.

“These conveyors experience all the same challenges faced by massive corporate mines,” observed Martin Engineering Territory Manager Steve McKenna. “And because they have such an abbreviated time frame in which to operate, every hour counts. So, we focused on the designs engineered for long service life and minimal maintenance.”

In a move to further reduce the chances of fugitive material problems, technicians also installed tail pulley protection in the form of a V-plow. “Bulk material bounces when it comes in contact with a fast moving conveyor and often shifts as it travels over carrying idlers,” said McKenna. “These disturbances can eject small amounts of material from the belt. Occasionally along its return run, the belt will collect lumps of spilled material on the non-carrying side. If it’s not removed, it can become trapped between the tail pulley and the belt and do significant damage to both.”

Once the belt cleaning systems had been fine-tuned, Poulson and McKenna turned to some of the other challenges faced by the 316 Mining crew. Another issue that Poulson and his crews had been battling was belt tracking. “Rain, snow and freezing temperatures can all affect conveyor operation, especially when the carryback gets some ice on it,” Poulson continued. “So, achieving a clean belt was a critical first step. But we were still getting some belt wander.”

McKenna came through again, this time with a new design for a roller tracker to stabilise fast moving belts. Based on a standard crowned roller, the tracking mechanism uses a unique ribbed lagging made of durable polyurethane to increase performance and wear life. The roller does not come in contact with the belt edge, which minimises fraying while delivering excellent tracking for single-direction or reversing belts. The result for the Hoffman crew is a more centered cargo load, less spillage and increased safety from the hazards of belt wander, leading to higher productivity and lower cost of operation.

The conveyor to the crusher presented a different problem. While the belt needed tracking assistance, the framework prevented installation of a standard unit on the 42 in. wide belt. “We figured out a way to modify a 36 in. unit to fit on the wider belt,” said McKenna. “This kind of thing comes up occasionally in the field, and we try to be ready to get creative when we need to.”

Further safety enhancements included Martin Engineering conveyor guarding to protect workers from pinch points and other hazards. The modular guards allow workers to do their jobs with reduced risk and greater efficiency, while helping to ensure plant compliance with safety standards and regulations. The user-friendly design of the new guards is seen in standardised panels that take a systematic approach to guarding, with the flexibility to fit virtually any conveyor design. Wedge clamps allow the panels to be removed and reinstalled quickly and easily, so systems can be expanded or relocated as needed.

“No matter how large or small the mining operation, safety is the top priority,” said Poulson. “We’re no different. We want our crew members to go to bed every night with all their body parts intact.”

The most recent Martin Engineering addition to the 316 Mining operation has been the installation of the company’s patented Roll Gen™ system, an innovative technology that uses the kinetic energy from a moving conveyor belt to generate enough power to run a wide variety of electrical or electronic systems.

“There are limits on the operating hours at this location,” Poulson explained, “and we’re only allowed to run generators until 7 pm. With this system in place, it runs all day off the conveyor belt, storing energy in a battery bank. Then we use that stored power to run our security lights all night long.

Designed to create a self contained mini power station, it can be retrofitted on existing idler support structures, and operators are not required to maintain a special stock of conveyor rollers, as the generator can be employed on virtually any steel roller. “This device is considered a first step toward eliminating power production obstacles, as conveyors move into the next generation of ‘smart systems’ that are predicted to be more sustainable and autonomous,” McKenna added.

“The components that Martin has provided have made a huge difference in our operations,” Poulson concluded. “We’re faster, safer and more efficient as a result, and I can’t say enough about the services these guys have delivered. It’s the best I’ve ever seen in my two decades of mining. We’ve developed a close relationship with them, and we’re very grateful for the incredible support they’ve given us.”

Read the article online at: https://www.globalminingreview.com/handling-processing/07032018/martin-engineering-conveyor-technology-aids-gold-rush-team/

Join us for a webinar with OSIsoft to learn a simple definition of AI and the benefits of adopting it into your operations, the anatomy of a successful AI project and real-world examples and success stories. Register for free today »

Great Panther Mining Ltd has announced its 4Q20 and annual 2020 production results from its three 100% owned mines: Tucano in Brazil, and Topia and the Guanajuato Mine Complex in Mexico.

Become a member »
Get started absolutely FREE in 2 minutes, no credit card required.

Watch this OSIsoft webinar to learn a simple definition of AI and the benefits of adopting it into your operations, the anatomy of a successful AI project and real-world examples and success stories.

Register for your free space