A newly released case study, co-authored with leading gold producer Northern Star Resources, reports how in just two months at one operation, Minnovare’s Production Optimiser technology increased drilled metres by 17% and delivered the highest average stope recovery in the life of the operation. If maintained over a full year’s production, that represents an additional 5000 oz and around AUS$8.4 million additional revenue – equivalent to a 3.5% increase in forecast stope turnover, according to Northern Star Mining Services (NSMS) General Manager, Rob Parsons. 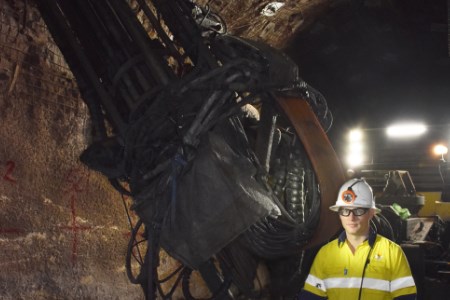 Working in close collaboration with NSMS, Minnovare implemented the Production Optimiser at one of its Kalgoorlie operations in April 2018, running three long-hole production rigs.

Parsons stated: “The collaboration with Minnovare initially stemmed from the observation that too much time was being spent re-drilling holes [due to inaccuracy]. The other problem we identified was the difference between the drill rig’s onboard inclinometers, and what was actually being drilled. It was most visible looking at the final stope pick up – the actual shape didn’t line up with what you had designed. So, we were doing extra work just to validate where things really were.”

The system can be retrofitted to any make or model of drill rig and works independently of the rig’s onboard systems.

Parsons noted: “We achieved, on average, 100 additional drill metres per day in the two months immediately after implementing the new technology, thanks to reduced rig setup time and re-drills. That’s roughly a 17% increase in drilled metres. During the same period we reduced average blast-hole deviation (from planned toe-point) by 75%.

“In terms of stope ore recovery, those two months combined were the highest average for the life of the operation. The increased drill rate and stope ore recovery equates to an approximate 3.5% reduction in stope turnover time. This may not seem like a lot, but if we can maintain that rate over a 12 month period, that represents about 5000 additional ounces and around AUS$8.4 million additional revenue at the current gold price.”

Minnovare Managing Director Callum McCracken stated: “Minnovare worked closely with Northern Star from day one to successfully implement the Production Optimiser onsite. As the drillers and engineers continued to use the system they’ve seen further gains in drilled metres and a continuation of the improved recovery rate. That’s thanks to optimal blasts and a faster stope turnover, which is a direct consequence of greater drilling accuracy, speed and reliability.”

Minnovare Commercial Director Mick Beilby said: “We’re really pleased with the initial results from Northern Star. It’s further validation of this new technology and further proof of the impact it can have on the bottom line of any underground drill and blast operation.”

Read the article online at: https://www.globalminingreview.com/exploration-development/22112018/northern-star-reaps-benefits-of-new-drill-and-blast-technology/