First Mining Gold Corp. has made an offer to acquire all of the issued and outstanding shares of Beattie Gold Mines Ltd, a private company that owns the mineral rights to mining claims that make up the former Beattie mining concession – which forms a large part of the Duparquet Gold Project located in Quebec, Canada. 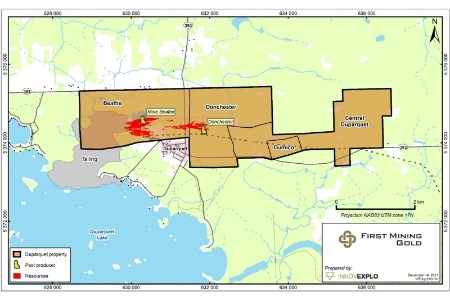 The Duparquet Gold Project consists of several properties held in different entities which, in addition to the Beattie property, include the Donchester, Dumico, and Central Duparquet properties. First Mining, through Clifton Star, is currently a 10% shareholder of 2588111 Manitoba Ltd, a private company that owns the mineral rights to mining claims that make up the former Donchester mining concession and Dumico property that also form a part of the Duparquet Gold Project, and a 10% shareholder of 2699681 Canada Ltd, a private company that owns in whole or in part, the surface rights to the Beattie, Donchester, and Dumico properties. First Mining already owns 100% of the Central Duparquet property.

Concurrent with making the Beattie Offer, First Mining has entered into share purchase agreements to acquire all of the issued and outstanding shares of 258 Manitoba and 269 Canada that are not already owned by Clifton Star. The concurrent transactions are conditional on the Beattie offer, and will close on the same day as the Beattie offer, which is expected to be in mid-September.

“This transformational acquisition has been a few years in the making and grows First Mining’s M&I gold resources by 40% and inferred gold resources by 50%”, said Keith Neumeyer, Chairman of First Mining Gold. “When First Mining acquired Clifton Star in 2016, we always contemplated the opportunity to consolidate this advanced stage, highly prospective project. Duparquet fits perfectly with First Mining’s strategy and the capabilities of our team to advance and de-risk a second world class asset.”

“This is a transformational acquisition for First Mining and the Duparquet Gold Project as we plan on consolidating this highly fragmented ownership structure under the First Mining banner. Duparquet hosts a robust resource profile where two past producing mines have operated in Quebec’s most prolific gold mining district. First Mining has been a long-time minority shareholder of the companies that own this project, and the timing was right to acquire full ownership of these companies. We are confident that Duparquet and the district will prove to be a critical strategic asset in the gold sector in Canada as this transaction affirms First Mining’s positioning as a multi-asset developer of major projects in Tier 1 jurisdictions,” stated Dan Wilton, CEO of First Mining. “Together with our ownership of the Pitt and Duquesne projects in Quebec located just east of Duparquet, First Mining will now have 100% ownership exposure to 3.3 million M&I ounces of gold and 2.0 million inferred ounces of gold located in the Abitibi, which is home to some of the largest and richest mineral deposits in the world. First Mining has completed extensive due diligence and will develop a comprehensive plan to advance the Duparquet Gold Project in the near-term. Springpole remains a core focus and priority as we continue to advance the project through feasibility and the environmental assessment process. The addition of Duparquet results in First Mining owning 100% of two projects with multi-million ounce gold resources in what we consider as the best mining jurisdictions in the world and will allow First Mining to leverage our team’s experience with similar projects in advancing these two major gold deposits.”

Read the article online at: https://www.globalminingreview.com/exploration-development/20072022/first-mining-announces-acquisition-of-duparquet-gold-project/

Weir Minerals, manufacturer of the Warman® slurry pump, has released the 6th edition of its coveted Warman Slurry Pumping Handbook.