In August 2018, a milestone in the mining industry was reached with the successful completion of two blind shafts to depths of 975 and 1005 m at the Jansen Potash Project in Saskatchewan, Canada. For the first time, shafts in the mining business have been sunk using only mechanical excavation for this reference project. 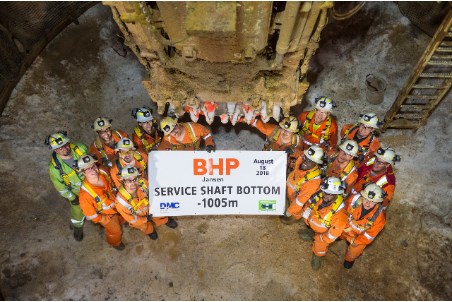 Two Herrenknecht Shaft Boring Roadheaders (SBRs) excavated the ground by a partial-face cutting method, using a cutting drum mounted on a telescopic boom. The excavated rock was then conveyed from the bench by an innovative pneumatic mucking system (PNM) and transferred into muck buckets to be hoisted to the surface. A laser navigation system designed by the Herrenknecht subsidiary, VMT Group, utilising target units mounted on the SBR and lasers connected to the shaft wall, was used to keep the machines on track.

Herrenknecht developed the SBR for the mechanised sinking of blind shafts in soft to medium-hard rock. Based on the proven technology of the Herrenknecht Vertical Shaft Sinking Machine (VSM) it offers improved safety performance compared to conventional shaft sinking methods while also achieving higher advance rates.

The geological conditions however were anything but easy. At a depth of around 450 m, the SBR encountered a layer of extremely hard competent rock causing excessive pick wear and low rates of advance. To overcome this and some further hardness challenges, the cutting drum was upgraded to a hard rock cutting drum and torque output was doubled. Because an existing high pressure underground waterway known as the Blairmore aquifer posed a risk for water ingress into the shaft, ground freezing was executed temporarily in 2011 by BHP to a depth of approximately 650 m.

A major success in this difficult geology was the use of a mechanical ring erector allowing the installation of steel tubbing segments with minimal risk to personnel and a high degree of accuracy. The steel liner rings were installed through the Blairmore aquifer to assist in the development of a composite steel and concrete watertight liner in both shafts.

Since the project-specific design changes at Jansen required modifications to the SBRs, Herrenknecht together with DMC Mining Services refined the SBR technology as a whole over the long term. The result is the second generation of the Herrenknecht SBR technology. As an example, the second generation SBR is equipped with an additional stabilisation level allowing the fixation of the SBR center pipe on both ends. This ensures a stable transfer of the reaction forces from the cutting process to the shaft wall without movement of the machine – even with fluctuating excavation dia. of 8 m up to 11 m, as encountered at the Jansen Potash Project. In addition to an improved filter system, a new design of the PNM system was installed which results in a higher degree of separation in the suction tank itself, allowing wet material and even water to be handled.

“The technical development of the second SBR generation is based on the lessons learnt from the Jansen Project”, underlines Martin-Devid Herrenknecht, General Manager Mining at Herrenknecht. Two SBRs of this generation are currently in operation in Belarus and achieving good performance as a result of the improvements made. “This pioneering approach is certainly a game changer for shaft sinking in soft and medium-hard rock, impacting the whole mining industry.”

After the successful excavation, another task was to be managed: the disassembly of the huge machines in the deep shafts. To remove the SBR from the shaft bottom it was necessary to reduce the weight of the machine from 390 to 340 t. This was achieved by stripping all components off the SBR that were in the excavation chamber. Both SBRs were safely extracted from the two shafts at the Jansen Potash Project in May of 2019.

The Jansen Potash Project located approximately 140 km east of Saskatoon, SK, is a BHP-owned future potential potash mine with an expected initial mining output of around 3 - 4.5 million tpy with valuable expansion options.

Read the article online at: https://www.globalminingreview.com/exploration-development/14052020/mechanised-shaft-sinking-technology-sbr-proves-itself-in-canada/