Global inflation is driving up demand for commodities and now a number of mining operations are racing to find past producing properties that were once mothballed due to the persistence of low prices. Often these properties have significant assets that can be unearthed with modern mining techniques. However, operators are finding that those armed with capital and improved ESG strategies are able to get the lights turned back on and production ramped much more quickly. 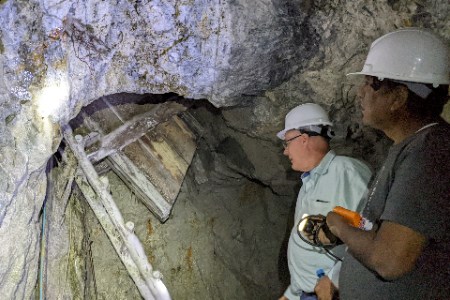 “Investments are moving away from paper assets and toward hard assets, but unlike other commodities, the price of precious metals actually has not responded by as much,” says Kim Kirkland, Vice President of Global Exploration at Element79 Gold Corp. “So, there’s a lot of room for positive movement.”

Element79 is a publicly traded global mineral exploration company focused on the acquisition, exploration, and development of mining properties for gold and associated metals. It recently acquired its flagship Maverick Springs Project located in the gold mining district of northeastern Nevada. However, the company was also looking to acquire properties that could be producing more quickly.

The practice of returning to past-producing mines is almost as old as mining itself. Even today, companies are returning to mines that were first started by the Romans for one simple reason; because, “that’s where the gold is,” remarks Kirkland.

This spring, in central Africa alone, companies like Quantum Minerals Ltd. approved a billion-dollar expansion in Zambia. Gold giant Barrick Gold Corp., which had been reportedly shopping its Zambian mine, expressed interest in hunting for new past-producing copper projects in the area. While Britain’s Moxico Resources announced a new US$100 million investment into the expansion of its Mimbula mine which sits along the African copper belt.

“We all want to find a property where there is an ‘elephant’ lurking,” adds Kirkland. “There are actually a number of properties that have hardly been explored which is amazing to find in this day and age.”

The chances of uncovering a large asset, or ‘elephant,’ in a past producing mine often increase with the utilisation of bleeding-edge technologies. This could include the use of AI systems to analyse geological and geophysical data from existing drill holes and regional analogues. However, there are a number of instances where even more traditional methods are turning the tide.

Kirkland – who has had a long career working for some of the largest mining companies in the world including Barrick, Rio Tinto, and MMG Ltd. – says there are a number of properties where even traditional technologies have yet to be employed.

“In a lot of cases these properties don’t have any drilling, or if they did it was very limited,” explains Kirkland. “I’ve seen a lot of places in central and South America where companies without much financing would simply go in from the surface on veins and drift on them to see what they get.”

A thorough drilling plan can be expensive but understanding what techniques allow for the most economical extraction of resources enable a modern capital invested mining operation a greater opportunity to see positive cash flow more quickly.

“In order to do that we have to look at the whole property to see what techniques will allow us to maximise our investment,” explains Kirkland.

As an example, Element79 recently signed a letter of intent to purchase two past producing high-grade gold and silver mines in Peru. The Lucero mine was suspended in 2005 and the Machacala Project was halted in 1991 both due to the persistence of low gold and silver prices at the time.

Peru is one of many places which are now considered to be a favourable mining jurisdiction, but were once considered a ‘no man’s land’ for foreign investment. Political instability during the 1980s, dubbed the ‘lost decade’ or ‘the Crisis of the 80s’ (La crisis de los 80), created an exodus of investments from the country. While the government today appears to be standing on more stable ground, local governments in some remote places can take the shape of a tribal leader or a lone officer. Understanding how these local governments operate is still crucial.

However, the long drought in foreign investment may have left a cache of properties that are now ripe for exploration.

“When we did on our due diligence trip to Peru earlier this year, we put our hands right on the vein and physically observed the gold and silver,” says Kirkland. “And then seeing the lay of the land and the alteration signature on the surface, it looks like elephant country to me.”

It is not only the mining techniques that are critical to capitalising on these legacy properties. Over the past few decades, the resource exploration sector has been met with some well-warranted environmental and social criticisms.

“My recent experiences at Las Bombas tell me that as miners we have to do better if we are going to make these areas work,” says Kirkland.

MMG Ltd’s Las Bambas copper mine located in Peru was completely halted at the end of 2021. According to reports, local residents rebuffed the project and argued that the mineral wealth of the mine was simply bypassing them. In turn, they protested in an attempt to secure more jobs and money for the area.

Kirkland suggests that mining operations look to include local artisanal miners who are often informally mining at many of these shuttered sites. By formalising them into part of the mining project, they get security, improved safety, and a well-paid job.

Additionally, many of these sites contain contaminated waste products from previous producers. By offering to clean up these sites, mining companies could provide a positive outcome for future generations in quite possibly what is a profitable venture.

“Step one is we want to be a producer quickly,” says Kirkland. “And a lot of legacy mines have tailings that have good value in them, and what we really need to do is perhaps start by reprocessing those tails. There’s a lot of metal value in them and then stabilise those for a net positive impact.”

In fact, by taking this approach some miners have found it can expedite the permitting process.

“You go in there and say: well, you’ve got a problem here, how about we pick this up, move it, reprocess it and stabilise it for the long term,” explains Kirkland. “The practices used decades ago were almost always not what we would consider nowadays to be responsible.”

Finally, as the price of commodities continues to increase, mining operations are positioned to develop more than just the most valuable or primary commodities within a known deposit. Since these key minerals occur together naturally, mining operations can now extract not just gold and silver, but all the associated minerals which are technically feasible.

Kirkland believes that by taking these steps, mining operations can set themselves up for the best chance of success at hitting the market while it remains red hot.

Read the article online at: https://www.globalminingreview.com/exploration-development/07072022/element79-gold-miners-race-to-turn-the-lights-back-on/