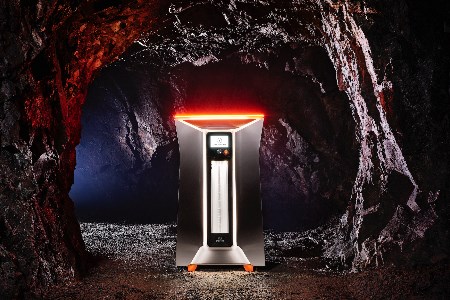 The product, which won a Red Dot Industrial Design Award in 2017, analyses the element concentrations and minerals contained in a drill core, as well as providing a visualisation of the rock's internal structure in 3D. What took weeks of expensive chemical laboratory analysis can now be done while drilling, which will revolutionise both ore exploration and mining.

With Orexplore's innovative equipment, the world's geologists get a new and exciting tool for finding ore deposits as well as streamlining existing mines. The opportunity to take a drill core, and immediately see what it contains, is completely groundbreaking. By visually looking at the structure of the rock, geologists can form an idea of how the bedrock has been transformed over time, how minerals are distributed and how valuable the ore body really is.

The GeoCore X10’s ability to detect minerals, such as pyrite and other sulfides, is especially interesting to the gold mining industry. Mineral information, coupled with visual 3D data, can help geologists understand the history of the geological structures of a site in order to better target zones with a higher probability for gold ore deposits.

"In Sweden, we have hundreds of years of mining experience in addition to our skills in technology and IT. Against this background, it is perhaps not so strange that the GeoCore X10 was created right here,” says Kevin Rebenius, CEO and Founder of Orexplore. “The entire mining industry, a somewhat conservative industry, is now facing a revolution in digitalisation and the use of IT. And Sweden is the country leading the transformation.”

GeoCore X10 is the result of over 20 years of X-ray research, algorithm development and sensor technology. Despite the advanced technology, the goal has been to design a product that is so simple that it can be used by anyone. Moreover, the measurement is non-destructive, which means that you do not need to prepare the drill cores beforehand.

The digital data produced with the equipment can be analysed by a geologist at the site or on the other side of the globe. By examining multiple drill cores from different holes and different depths, geologists can form an idea of how the bedrock underneath our feet looks and what it contains.

GeoCore X10 is first launched in Australia, in collaboration with the Swick Mining Services Group, and globally later this year.

Read the article online at: https://www.globalminingreview.com/exploration-development/06062018/orexplore-launches-first-fully-featured-digital-drilling-cores-laboratory/